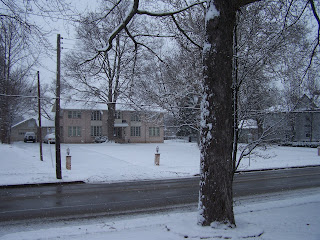 Well, you can imagine my surprise when I learned that Elkhart County gets pretty much the same amount of rainfall each year as Vancouver. However, here in Indiana, when it rains, it rains. 6-7" in 3-5 days. That would take 2 months of drizzle and mist in the the PNW. Maybe that is why it rains 8 months a year.

Now snow, we did not get much snow in the Portland Metro area. Snow is kept on the mountains, real ones, like the Cascades. It is kept there for skiing and snowboarding, because when it snows in Portland the entire city shuts down. You can imagine the teens' surprise when they learned that 15" of snow here might a 2 hour late start.

The neighbors told us to be ready for snow by mid-October, and that we would have snow by Halloween. I am not sure if they were messing with us, but it is December 6th, and we do not yet have snow. The forecast says "possible flurries." I suspect this is somehow equivalent to the showers versus rain forecasting in the PNW.

It was 50 degrees on Sunday, and has been rather warm, 40-50s degrees, for this time of year. But the temps this morning have dropped to 30 and the forecast all week is dipping into the 20s. Well, I guess this is it. We are in for some snow. Although I am placing my bets on Friday's extended forecast for "snow." There seems to be a note about "measurable accumulation" and that seems important.

I pruned back the last of the roses and the beds are all mulched, so I hope I am ready for this :) I did notice that the temps in Vancouver are similar and I suspect that there is more damage to plants there than here under a protective blanket of snow.

If it snows I will take photos for winter interest planning and post them later.
Rainy Day Reflections