on November 04, 2011
Beetle banks are graded low banks or berms placed around your planting areas to attract and enhance populations of predatory beetles and spiders. They are planted with grasses and provide an overwintering habitat for these invertebrates. Predatory invertebrates will complete their life cycle in the banks. They will colonize the banks in early fall and migrate into your crops in early spring.

It may take two to three years to establish a beetle bank. September and October are the best months to establish beetle banks, but anytime before winter frosts or in early spring before annual planting is acceptable.

Beetles and spiders are generalist species with a wide range of insect prey.

Remember that once you establish insectary plantings or beetle banks you must discontinue use of pesticides. A pesticide cannot seek out the aphid you wish to destroy, or the cutworm attacking your broccoli. You must be patient and allow your new habitat to come into balance. This may take 3 years, and in the interim you will need to practice other IPM controls such as handpicking and monitoring. 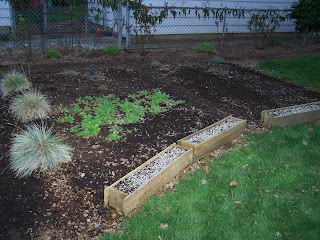 The three grasses to the left in this photo show the start of a simple beetle bank. Borders and pathways are a great place to establish beetle banks. This bank borders one side of a vegetable bed.
Edibles: Year Round Organic Gardening Entomology (bugs & insects) Planning and Design